When Bobby’s runny nose and constant sneezing turn out to be an allergy to dander, he is given some medication, and Hank is told to get rid of Ladybird. Hank is taken aback, trying to find any way around it…so he builds a luxurious new doghouse. During the ‘Grand Opening’ of the house, Ladybird refuses to go in. Hank rethinks his options, and sends Bobby out to live in the house. When he finds that he enjoys living on his own, he finds ways to stay allergic. 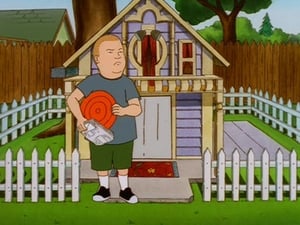