The Hills head to Japan because Cotton wants to apologize for his actions in WWII. The grizzled vet says he plans to address the widow of a soldier he killed. Peggy arranges to cover the visit for the local paper, but the family arrives to find it has become an overblown media event. Cotton admits to Hank that the “widow” was never married, and the “action” did not occur in battle. Meanwhile, back home, Dale and Bill prove themselves dedicated house sitters by dressing up as Hank and Peggy; and Luanne finds a replacement dog when she thinks she has killed Ladybird. 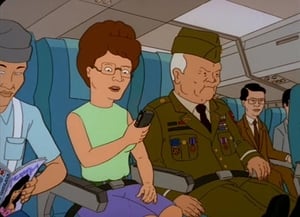