After Peggy organizes a bird society, Bill begins trying to attract birds by laying out food in everyone’s yard. When pigeons begin to flock to Bill’s yard as well as all the neighbors, Dale is called in to exterminate but can’t get rid of them. Dale calls in the “pigeon god,” Arlen’s greatest exterminator, Sheila Repkin, who turns out to be a beautiful woman who takes an interest in Dale. When Sheila invites Dale to go on an all-night exterminating session with her, Nancy fears that Dale may cheat on her the way she used to cheat on him. Meanwhile, Luanne celebrates her 21st birthday by going to a bar with two friends, and brings Hank along as the designated driver. 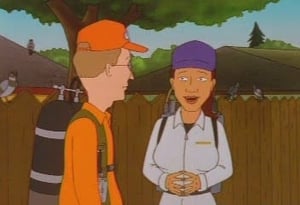