Girl, You'll Be a Giant Soon

Hank is outraged when he finds that the Texas State Fair Grill-Off doesn’t allow grilling with propane. Luanne, who wants to be treated like an adult, offers to help Hank organize a grilling protest. Luanne enlists the help of college protestors, which so appalls Hank that he kicks her off the protest. Determined to prove herself, Luanne climbs up into Big Tex, the State Fair’s giant mascot, and continues protesting on her own. Meanwhile, Peggy tries to visit a house where a famous murder took place, but the real estate agent is only letting in potential buyers. 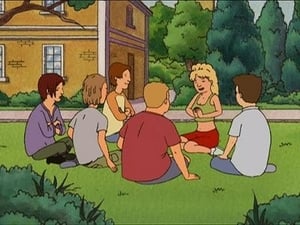